An EXTENSION is configured to route the communications received in your Infocaller service.

An EXTENSION will be created for each destination number to which you want to route the calls received in your Infocaller service.

An additional powerful feature of Infocaller is the possibility of defining an EXTENSION to an “Extension group”. This configuration allows the call to be routed to a group of destination telephone numbers so that if one of the numbers does not answer or communicate, the call to the next number in the list is attempted. It is a simple and powerful way to distribute the calls received to a group of people that can be distributed in different locations.

The fields to define an EXTENSION are:

“Name”: A short name to identify the CALL where it is used: rules, or hyphens.

“Extension”: An extension number can be defined to transfer received calls.

“Extension destination”: The destination telephone number for the diversion or group of extensions.

“If you do not answer / busy”: If the call cannot be connected, or if all the numbers of an “extension group” have been tried without success, this option indicates what will be done once the attempt is finished. The default option is that the user will hear the “telephone tones”, either the telephone ringing or the busy line tone. The second option is an answering machine, after which the call is terminated. The third option is the announcement of a message, after which the call is also terminated. When the “wait queue” option has been activated, the attempt will end when the indicated waiting time has expired. 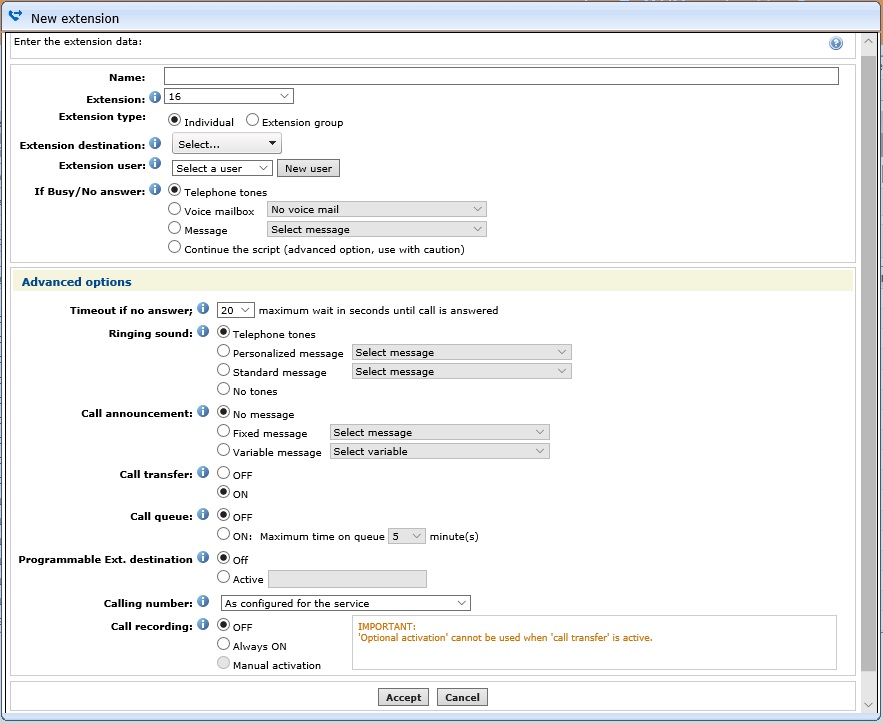 “Timeout if no answery”: Set the maximum waiting seconds until the call is answered. Default 20 seconds.

“Ringing Sound”: While the call is connected, the default setting is that the user will hear the telephone ringtones. But you can also choose to have the user listen to a message while trying to communicate. This is especially useful in the "group of numbers" option since in those cases the user could hear several attempts and silences interspersed. It is recommended to use a message with sufficient duration to cover all the time it could take to connect to the destination number. You can create your own message with a speech ("Your call is being transferred, one moment please" or "While waiting we inform you that ...") or with a mix of speech and music. We offer some standard messages.

The "no tones" option should be used with caution as no sound will be emitted during call execution. This option can be used when a message with the "Asynchronous" option is previously used. This message will continue to be issued while the call is made.

"Call announcement". Message that will be issued to the receiver of the call before forwarding.

“Call transfer”: To activate the call transfer you must have previously configured the “Extensions” in which two-digit codes are assigned to each call. With the option activated, the person receiving the call can dial "0" and then the two-digit code that corresponds to the number to which you want to transfer the call. Infocaller will disconnect the conversation in progress and route the call to the selected extension. The two digits must be dialed in a row and with a separation between them less than 2 seconds.

“Call queue”: When this option is activated, if the call attempt is unsuccessful (to the number or group of numbers indicated), the call will be put on hold and the call will be retry for the maximum time specified for this queue. If you have specified a message for the queue, the message will be issued after the first failed attempt. Then, the waiting sounds indicated in the call settings will be respected.

“ Programmable Ext. Destination”: Only available in Pro services. Typically, the destination of the call is a specific number or group of telephone numbers. However, if you have previously obtained a piece of information that you have saved in a variable (in a script using “keyboard data entry” or from a web application using our API), the destination of the call may be a variable. You should use this option with caution.

“Calling number”: When you divert the call, you can define the number that the receiver of the call will see. You have the following options:

Show the originating number of the received call.

Show the called number (in case you have an additional number to the main Infocaller).

“Call recording”: In the “Pro” Infocallers, diverted calls can be recorded. You can configure the recording to make “Always” on all received calls or to activate it “Manual”. In the second case, the receiver of the call can activate the recording during the conversation, dialing on his phone # 7 (pad, 7).

IMPORTANT: Whether the recording is always done or if it is activated manually, the client is required by law to INFORM THE CALLING PARTY THAT THE CALL IS RECORDING. The client is responsible for the realization and content of the recording.

Recorded calls can be heard / downloaded from the activity query of your Infocaller service.

If you want to create a group of numbers, to route the call to a team of people on different phone numbers, select "Extension Group" and an expanded form like the following appears. 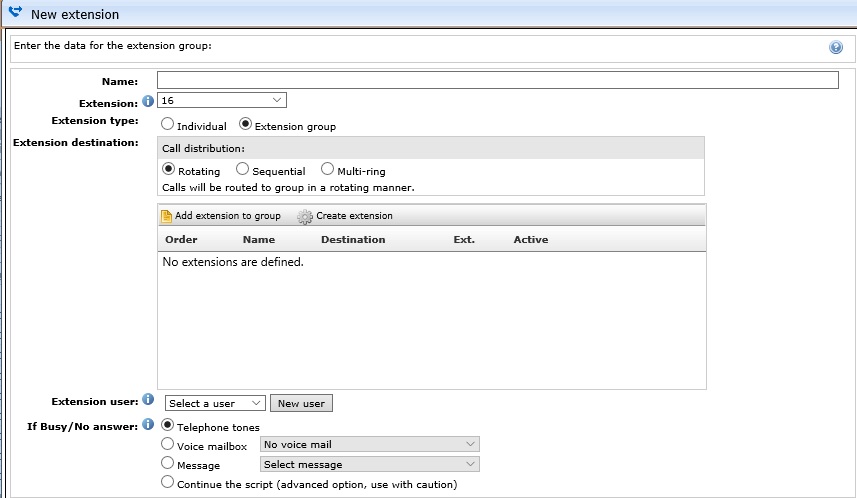 In this form the telephone numbers of the team members are added and the way in which you want to distribute the calls to the group is chosen:

“Rotating”: Calls are assigned on a rotating basis. The first call is attempted to be delivered to the first number on the list, the second to the second, etc., until the last and then returns to the first. This mode is used when you want to distribute calls evenly among the equipment.

“Sequential”: All calls are always attempted to be delivered to the first of the list and, only if it is not available, is the call to the following listed in the defined order. This mode is indicated when you want to give a priority order to the destination numbers.

When a “Group of numbers” is defined, the option selected in “If you do not answer / busy” is only activated when you have tried to call all the members of the group.

"Multi-ring." Incoming calls are sent to all the phones in the list at once (maximum 3).