How to create a Script Print

The script allows the sequential execution of ACTIONS in a call, both the MESSAGES, CALLS and ANSWERS that you have previously defined as other actions that are defined in the script itself:

When a script is created, a form appears in which it must be indicated first:

"Name": A short name to identify the script where it is used: rules.

“Description”: Optional description of the script.

The ACTION that appears by default in the script is the END OF CALL since this will always be the last action of the script. It will be executed at the end of the call for any reason.

To ADD AN ACTION, place the mouse on top of “End call” and press the right button (Control click on Mac). Then “Add action before” is selected and then a menu will appear with all the ACTIONS that you can add to the script. 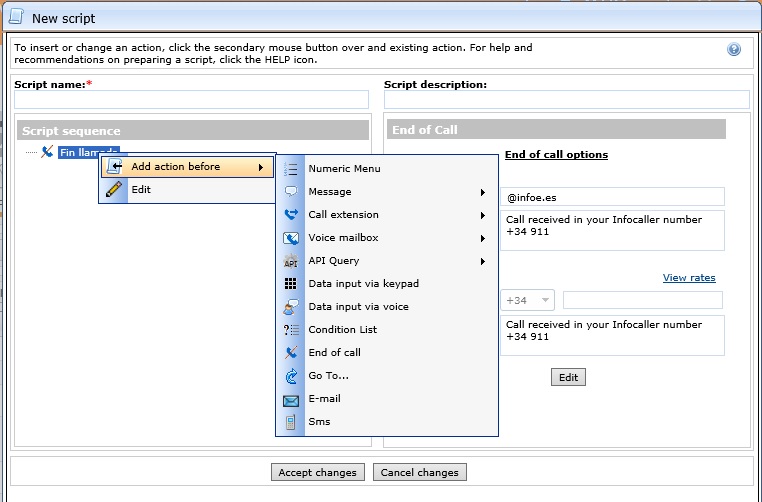 The script allows the sequential execution of ACTIONS in a call and interacts with the user with three new elements: NUMERIC MENU, KEYBOARD DATA ENTRY and DATA INPUT VIA VOICE that will be detailed later.

Some actions imply the end of the communication. That is to say that after carrying out no further actions are performed in the script (except the “End of Call”). These are the "CALL" action and the "ANSWER" action.

Only previously defined MESSAGES, CALLS and ANSWERS can be added. Therefore it is necessary to plan the script before configuring it.

“Numeric Menu”: This item allows the caller to offer, through a message, a series of options, which the caller can select by dialing on his phone. The message should be "dial one for ... dial two for ... or dial three for ...". 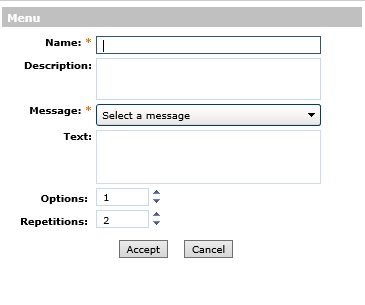 "Name": A short name for the Menu that will identify you within the script.

“Description”: Optional description of the Menu.

"Message": Message to be issued giving the caller the menu options. The text of the message must match the number of options defined in the following field "Options".

“Options”: Number of options that the menu will offer. It must match the message that has been selected for the Menu. A maximum of nine options are allowed.

“Repetitions”: The number of repetitions that are allowed from the menu in case the caller does not dial anything on his phone. When the repetitions are exceeded, the ACTION will be carried out, which will be defined later in “If no option is selected”.

Once you have entered the main data, on the left side of the form you can complete the actions of the Menu. 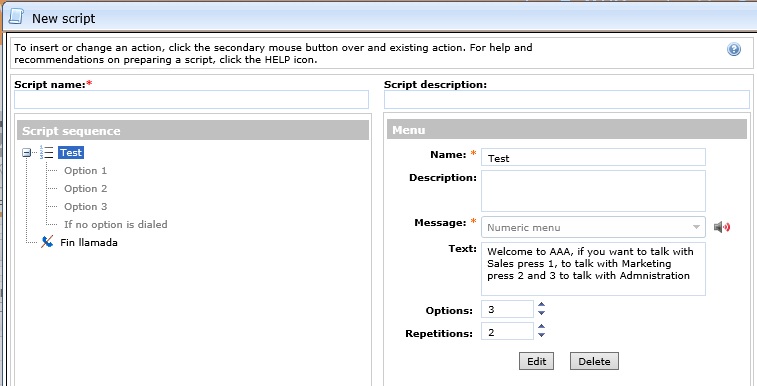 The number of options that have been defined for the menu will appear and at the end “if no option is dialed” where the action to be executed in these cases will be defined.

In each option an action or sequence of actions can be defined. For example, you can issue a message that says "Transferring your call to ..." and then make the call to that destination.

To add the action or actions to each option, click on the right mouse button (Control Click on Mac) on the corresponding option. 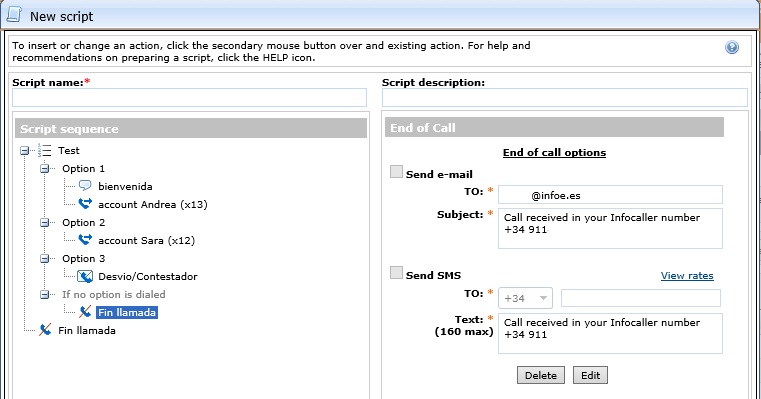 “DATA INPUT VIA VOICE”: With this option the caller can be asked to leave a voice recorded data. The message can have a maximum duration of 100 seconds, although usually it will be short messages. The message in which the data is requested must instruct the user to dial any number on his phone at the end. For example: “Say your full mailing address, including zip code, after hearing the signal. Mark zero at the end. ” 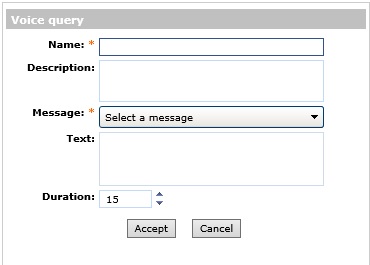 “END OF CALL”: You can configure the end of a call anywhere in the script. At the end of the call you can optionally specify that Infocaller send an email and / or an SMS 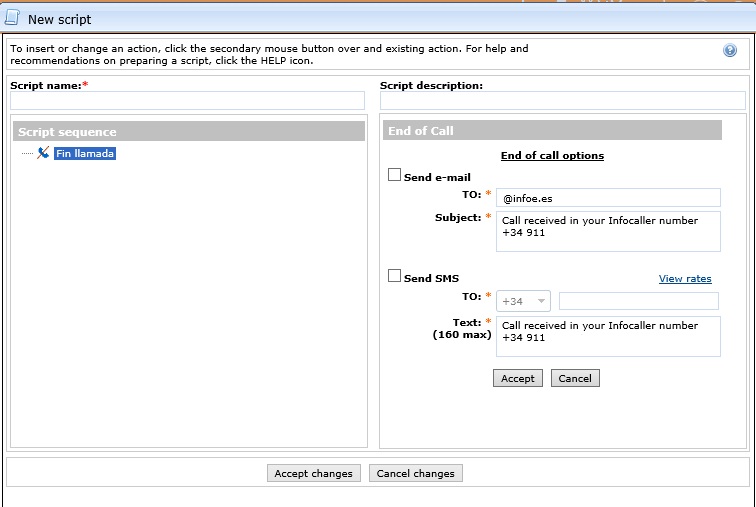 “Go to…”: For the development of advanced scripts, the “Go to…” option indicates that the execution must continue in a place in the script other than the following sequential action. It is very important to use this option with caution as infinite loops can occur in the call.

For example, it can be used to create several menus and submenus in a script, routing the call flow from one menu to another with the instruction “go to…”.

"E-mail": Generates the sending of an email at the time of the call in which it is indicated.

“SMS”: Generates the sending of an SMS message at the time of the call in which it is indicated.

“API Queries”: This is an advanced option and if you need additional help we are at your disposal in our customer service department.

Once you have defined the API in your Infocaller service, you can use it in the script, at the time you need to exchange data. You must specify a "Query Name", which will be transferred to your web application. In this way, your application can manage different types of requests from the same address.

You must also specify an ACTION IN CASE OF ERROR, indicating with what action your script should proceed if an error occurs or the waiting time in communication with your application expires. In addition to the variables that have been defined in previous actions of the call, the following internal data will be sent to your application

The data received from your application will be immediately available for use by other actions of the script. 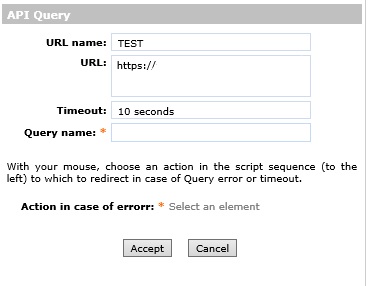 “Conditions List”: This is an advanced option and if you need additional help we are at your disposal in our customer service department.

The Conditions List allows you to evaluate and compare the data stored in the variables of a call and, depending on the result, choose the actions that will be performed in the call. Up to 9 assessments can be made in each list, but then you can put lists of secondary conditions in “Other conditions”. 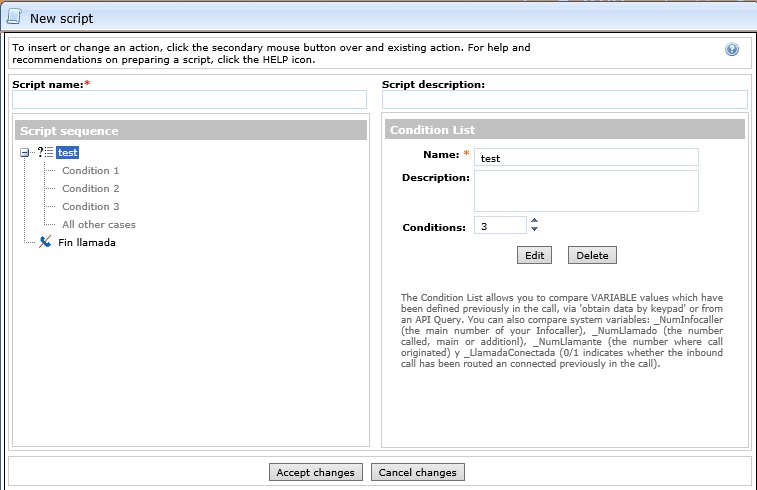 It is not equal to

Greater than or equal

Less than or equal to

It doesn't start with

It does not have

It does not end by

For each condition, the action to be followed in the call must be indicated.