The essential elements of automatic telephone support are MESSAGES.

These are the automatic phrases or questions that the caller will hear from your Infocaller service. The easiest and fastest way to create messages is to use “Text to speech” with our VIRTUAL VOICES.

We offer both male and female voices in various languages. But they are still electronic voices. Therefore, we offer you the possibility of using natural voices that you can record with your voice or with the voice of the person you choose. The quality of an automatic telephone service will always be better with natural voices. The two options are at your disposal.

When you choose to create a New message, this form appears: 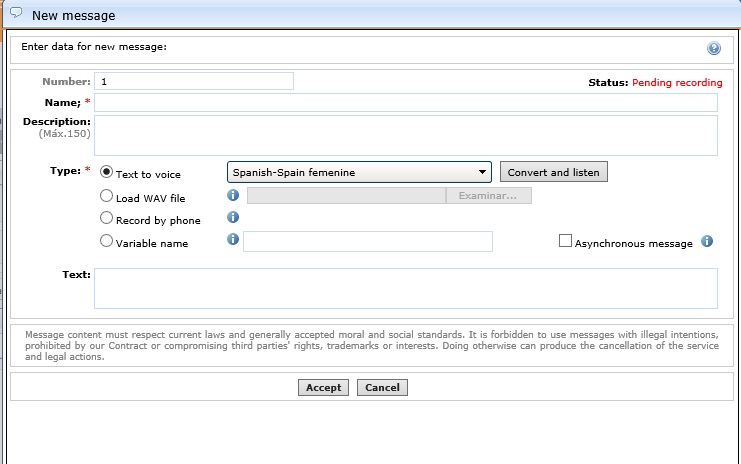 The message form fields are:

"Name": A short name to identify the message where it is used: rules, answering machines, hyphens.

“Description”: Optional description of the message.

“Type”: Through this choice you choose how the message audio will be produced.

“Text”: It is the text of the message you want to issue. In the case of the "text to speech" type, exactly what is written in this field will be spoken. It is important to punctuate the text well and be careful with words that have a different pronunciation than the chosen language. For example, if you enter a message in Spanish that includes a proper name in another language, it should be written in a way that phonetically gives the desired result. For example Infocaller would be written "infocoler".

"Asynchronous message": The asynchronous message option can be useful in situations where you need to emit a sound or background or wait message while other tasks are being performed, such as HTTP queries using our API, which could be delayed. Once the message has started, its completion is not expected to continue with the following actions of a script and therefore it can be interrupted at any time by another action, such as a call or another message. For this reason it is recommended to use this option with caution.