The RULES are defined in the Rules tab of the Infocaller service.

When a call is received in Infocaller, two data are handled:

The date-time of receipt.

The number from where the call originates.

The RULES instruct Infocaller to choose the ACTIONS that he will perform in the call.

The RULES of the Infocaller service are grouped into a GROUP OF RULES. This is so to allow the user to have defined different groups of rules that can serve him in different circumstances of his operation. For example, you can have a RULES GROUP defined for your company's normal telephone service and a second GROUP for emergency situations.

The most common is to have only one GROUP OF RULES. Only the people or companies that want to have planned and prepared different telephone service scenarios will need to define more than one GROUP.

In any case, only a GROUP OF RULES can be ACTIVE at a given time.

To define a rule you must first work with a Rule Group. If you already have a Rule Group defined, you must click on “Edit” the group. Or you can create a new group of rules by clicking on "New"

There is a rule that is always defined in a Rule Group. It is called the “REST OF CASES” rule and is what determines what will be done in all cases not provided for in the previously defined RULES.

Therefore, if all calls will be answered in the same way at all times and regardless of their origin, the only RULE required in the Rule Group would be the "REST OF CASES".

A rule allows you to define with a calling number, a date or time or a combination of these in order to execute the indicated Action. 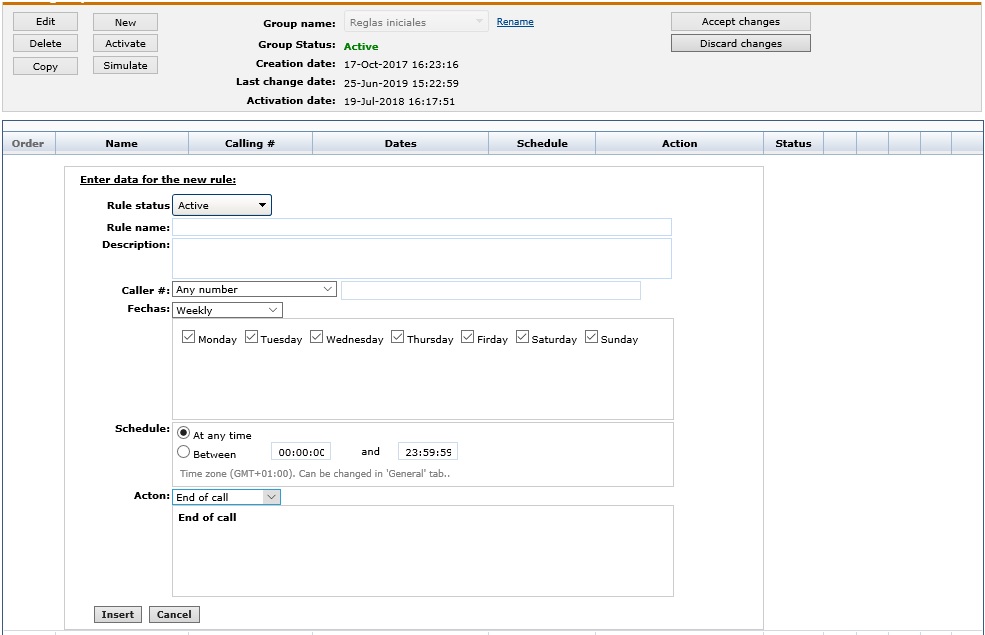 Normally the status of a rule is "Active." You can pass the rule to Inactive when, for some reason, you do not want that rule to apply.

A short name that describes the rule. For example "Morning working day" or "Holiday National Day".

Description: Optional field with a more detailed description of the rule.

Caller number: When you want to define a rule that answers calls based on the calling number, it will be defined here. The default setting is "Any number".

"Any number": the rule applies to any calling number

“Specific number”: the action defined in the rule will only be applied when the call originates from the number indicated

“Start with”: applies to all numbers that begin with the indicated digits. It serves, for example, to group all calls from a certain prefix.

“Private or unknown”: to identify hidden or private numbers and select a specific action in the call.

"Other than": similar to "specific number" but of opposite effect. The action will be applied to all numbers other than the one indicated.

"Does not begin with": similar to "begins with" but of opposite effect. To exclude those numbers from the rule.

“Non-private”: opposite of “private or unknown” to process calls that come from non-hidden numbers

The dates on which this rule will be applied are defined. By default it applies to "Everyday."

"Everyday": Applies to every day without exception.

“Monthly”: To indicate dates that are repeated annually or monthly, for example annual holidays.

“Weekly”: With this option you select the days of the week to which the rule applies.

Schedule: The schedule is applied to the date indicated in the "Dates" field. Its default value is "At all times."

Action: When the conditions indicated in the rule are met, in this field the action that will make the call is defined. The actions must have been previously configured in the "Actions" section of the Infocaller service configuration.

The actions that can be defined are:

Message: A recorded message or with a virtual voice is emitted and the call is terminated.

Call to extension: The received call is connected to the indicated phone number.

Voice mailbox: The received call is connected to an answering machine

End of call: The received call is rejected before answering. This action is useful to avoid, for example, receiving calls from hidden numbers.

Order of the rules:

The rules are processed in the order in which they are defined. This is very important. When defining its rules. The most specific rules must be prior to the more general rules. Otherwise the desired results will not be obtained.

For example, if rule # 1 specifies the action to be taken for all calls received Monday through Friday from 9 am to 5 pm and rule No. 2 does so for calls received on January 1, the desired results will not be obtained.

Rule # 2 will only be processed when it is NOT from Monday to Friday from 9 to 17. The correct thing will be to change the order of these rules, putting January 1 first (the most specific rule) and the weekly second.

When you edit a group of rules, arrows will appear in each rule that will allow you to change the order.

More info in our blog